Are you drowsy during the day with no explanation? Do you wake up feeling unstable and not refreshed? Do you have difficulty concentrating as you go about your day? If so, you may be one of more than twelve million Americans affected by "Sleep Apnea." This condition often goes undiagnosed, as doctors usually can't detect this condition during routine office visits, and there is no blood test for it. Indeed, most people who suffer from sleep apnea don't even know it, as apnea only occurs during sleep!

What is Sleep Apnea?

Sleep apnea is a condition in which breathing stops periodically during sleep, as many as 5–30 times per hour. ("Apnea is the Greek word for "without breath.") If you suffer from sleep apnea, each time your breathing stops, the resulting lack of oxygen alerts your brain, which temporarily wakes you up to restart proper breathing. Because the time spent awake is so brief, most people with sleep apnea don't remember it – and many think they are getting a good night's sleep. However, the constant wake-sleep-wake-sleep cycle precludes the deep sleep that refreshes the body, and sufferers are frequently drowsy during the day.

Sleep apnea is considered to be a serious medical problem as it leads to a reduction of blood oxygen saturation. If left untreated, apnea can lead to high blood pressure, thereby increasing the risk of stroke and heart failure. In addition, chronic fatigue caused by sleep apnea can cause problems at work or school, as well as danger when operating heavy machinery. Something else to consider….sleep apnea can lead to complications with medication or surgery (involving anesthesia) and the simple act of lying flat on your back during recovery.

How is sleep apnea treated?

Treatment modalities differ widely depending upon the type of apnea and the severity of the problem. Basic treatment may involve behavioral modification, including weight loss, eliminating a smoking habit, decreasing alcoholic intake, or simply changing sleep positions. A "sleep study" may be ordered in order to properly diagnose the problem. Often times, an oral device which positions the lower jaw forward is effective. In more severe cases, a breathing apparatus (c-pap machine) and/or surgical correction may be recommended. 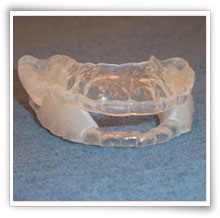 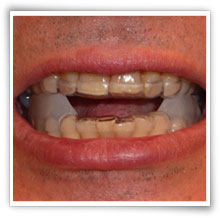